Pudsey's provision for housing the poor dates back to at least 1639 when the churchwardens and overseers were ordered to provide "howseroome and harbour" for Stephen Braithwaite and his wife (Strong, 1982). In 1663, the township officials were required to build "a Cottage house — upon ye Waste" to accommodate Isaac Gaunt, his wife, and three small children. The township's first workhouse had been established by 1741 when Lowton innkeeper Joseph Fenton bequeathed "my uppermost cottage and dwelling house called the workhouse where the poor of Pudsey are now maintained." In 1761, conditions in this establishment were said to be "lamentable and deplorable" and at least two children of widower Paul Hudson, a Moravian, died while residing there. Following complaints by the local Moravian community, it was decided to erect a new workhouse on common land at Littlemoor, at the north side of what is now Valley Road. The inmates were engaged in cloth making and a hoist was fitted above one of the first-floor windows (see illustration below) which was used as a "taking-in" door. Supplies for the workhouse were mostly obtained from the Moravian shop at Fulneck. The shop's records include the sale of sewing materials, harding (a coarse linen used to make men's shirts and women's shifts), and wolsey (a softer fabric with a flax warp and wool weft, used for petticoats and shawls). Provisions supplied to the workhouse included hops (for brewing), clay pipes, tobacco (shag and pigtail for the men, and ladies' twist for the women), and 20 lbs of treacle per week. Other goods included lettuce seed, bedcord (for stretching across wooden bed frames), and a "bakestone" (on which to bake oatcakes). More luxurious items such as tea, sugar, and dried fruit were occasionally supplied on a separate account for the workhouse "Dame". At the rear of the workhouse was prison where miscreants were locked up until the constables could escort them to the New Inn at Bradford to be dealt with by a magistrate. At a meeting of Pudsey's "Town's Committee" on 1st February 1802, it was resolved to "discontinue the poorhouse, the occupants to be disposed of as soon as possible," and at the next meeting, two weeks later, an agreement was made with John Cooper of Littlemoor, "to board the paupers residing in the poorhouse for one year, to commence on the first day of March, 1802, and likewise to find fire for them at the rate of three shillings per week per head, to have their earnings for his own benefit — the poor to have two meat dinners per week, and likewise to be under the inspection of the Committee to see they be well kept." (Rayner, 1887). In 1830, Martin George Crowther was the workhouse Master. Little Moor Council School was built on the old workhouse site in 1891, now replaced by housing. 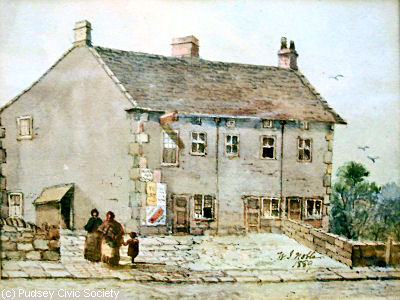 The workhouse for Calverley-cum-Farsley was built in 1756 on Calverley's Back Lane, now Blackett Street, at the expense of Sir Walter Blackett (formerly Sir Walter Calverley — he changed his surname as a condition of a inheritance from his uncle). The relatively generous treatment of the inmates made it an expensive place to run — bills in 1772-3 included ones from suppliers of cloth, milk, butter, malt, groceries, veal, beef and mutton, items which would not have been available to those on out-relief. In 1778, the Overseers resorted to offering 8d. a week to Hannah Sowden for agreeing to leave the workhouse. In 1807, the twenty inmates comprised six children, nine women (two bastard-bearers, one wife and the rest widows), two were old men and three were just referred to by their surname and noted as 'old' (King, 1997). The building no longer exists but a plaque from the original building has been preserved at the site. It reads "Sir Walter Blackett at his own Expence built this Workhouse in the year 1756." 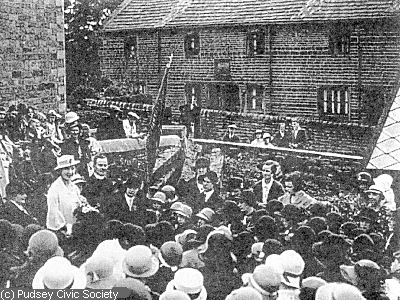 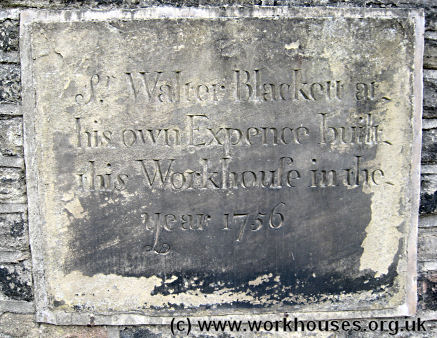 Idle's workhouse was at the south side of what is now Windhill Old Road. 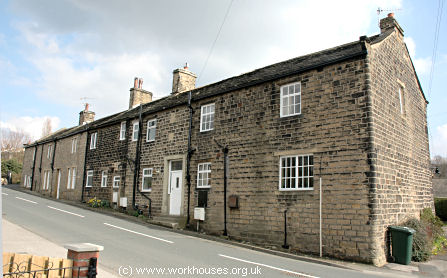 There was a workhouse in Clayton in two cottages on Ramsden Place, off Town End Road. In 1841, the location was refererred to as Workhouse Fold.

In 1790, the chapelry of Wibsey converted Odsal Farm into a workhouse. The buildings were later used as three cottages.

According to Baines' Directory of 1830, North Bierley had a workhouse at Hodgson Moor with John Wilkinson as its Governor.

Allerton had a workhouse near Allerton Hall in a property known as Dean House. 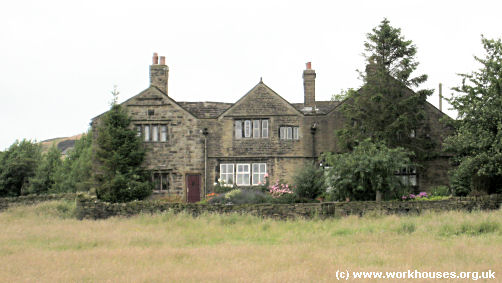 The rapid growth in the population of the Bradford Union led, on 16th September 1848, to the creation of the North Bierley Poor Law Union from a group of suburban parishes and townships around Bradford. The operation of the new union was overseen by a Board of Guardians, 17 in number, representing its 16 constituent members (figures in brackets indicate numbers of Guardians if more than one): Allerton, North Bierley, Calverley with Farsley, Clayton, Cleckheaton, Drighlington, Heaton, Hunsworth, Idle (2), Pudsey, Shipley, Thornton, Tong, Wilsden, and Wyke (or Wike). At the 1841 census, the population of the area covered by the new union had been 62,432 with parishes and townships ranging in size from Bolton (population 683) to Pudsey itself (10,002). The average annual poor-rate expenditure for the period 1845-7 had been £4,602 or 3s.1d. per head of the population. The parish of Eccleshill joined the Union in 1869.

Initially the new union continued using the old Idle township workhouse, which was a dismal place by all accounts. Following a meeting of the Board of Guardians there in 1848, it was reported that:

The occupants are chiefly old and helpless men and women, some worn out with infirmity and age, but far the greater portion helpless by reason of mental imbecility. There are about a hundred inmates in the house. In one small dark room, the benches, with high backs, forming a circle in front of the fire, contained a number of octogenarians, and a few somewhat their juniors. They sat motionless as statues. The day room of the females presented a melancholy sight. In front of a fire, at each end of a long room, were grouped a large number of women and children. Deformity was the prevailing characteristic of these persons. Idiocy and mental imbecility were marked in almost every visage, both of women and children. Such an absence of beauty in a collection of human beings we never witnessed. There were about thirty women and children in the room and we counted no fewer than twenty-six of deficient intellect.

In 1855, the union workhouse acquired a site at Calverley for the erection of a new workhouse. A foundation stone for the building was laid by Chairman of the Board, Joshua Fawcett. Unfortunately, it proved impossible to provided a satisfactory water supply to the site and the scheme was abandoned. The following year, a new site was found at Clayton Heights and again a foundation stone was laid by Joshua Fawcett. The building was opened in 1858. There were many complaints about the workhouse location — it was said that 'a more inconvenient and less desirable locality could not well be found' and that it was the 'Siberia of the North Bierley Union.' The site was later also overshadowed by the Horton Bank reservoir which was constructed in 1870-81.

The new workhouse could accommodate about 400 inmates. It was designed by the team of Henry F Lockwood and William Mawson who were also the architects of other Yorkshire workhouses at Bradford, Barnsley, Kingston-upon-Hull, Dewsbury and Penistone. The site layout is shown on the 1893 map below.

North Bierley had a two-storey entrance buildings at the east with a central archway. A casual block was attached at its southern end.

The three-storey T-shaped main building accommodated females at the north and males at the south.

The central wing at the rear contained the dining-hall and kitchens and formed the northern side of an enclosed yard. A bakehouse, laundry and boiler house lay beyond, with the original infirmary to the north-west, and later male infirmary to the west dating from 1878.

The workhouse was again enlarged in 1907. Later additions at the south-west of the site included a further infirmary block, and a nurses' home. The original infirmary block was converted for use as a mental block, with the addition of circular padded cells at its rear.

From 1904, to protect them from disadvantage in later life, the birth certificates for those born in the workhouse gave its address just as 1 Highgate Road, Clayton.

In 1930, the workhouse came under the control of the West Riding County Council. Its layout at this date are shown on the plan below.

The hospital closed in 1984 and in 1991, the site was sold for use as a private Muslim girls' school. Many of the original buildings still exist.

From the early 1900s, the North Bierley Union set up a number of children's scattered homes. The list of homes eventually included: 27-29 Beaconsfield Road, Clayton; 28 Gaythorne Terrace, Clayton; 5 The Grove, Idle; and 9 Hope View, Windhill, Shipley. A receiving home and nursery were also set up at premises on Beaconsfield Road.