The Workhouse in Wartime

Like virtually every other sphere of national life, the workhouse was affected when Britain was at war, most notably during the First World War (WW1). In the early months of the war, many workhouse staff volunteered to fight in the armed forces. At first, such individuals were viewed with pride and promised that their jobs would be kept open for them when they returned. As the conflict wore on, however, and it became clear that it would not be a short-lived affair, Boards of Guardians became increasingly concerned about the growing difficulties in staffing their workhouses and far less wlling to encourage volunteers.

During WW1, many workhouses, workhouse infirmaries and other poor law premises were given over, entirely or in part, to war-related use. Existing inmates were usually transferred to other workhouses in the area — this did not usually present too many difficulties as most workhouses were never anywhere near full. In November 1918, up to 74,000 beds were being provided to the military by the Poor Law authorities, 22,000 of which were in London. 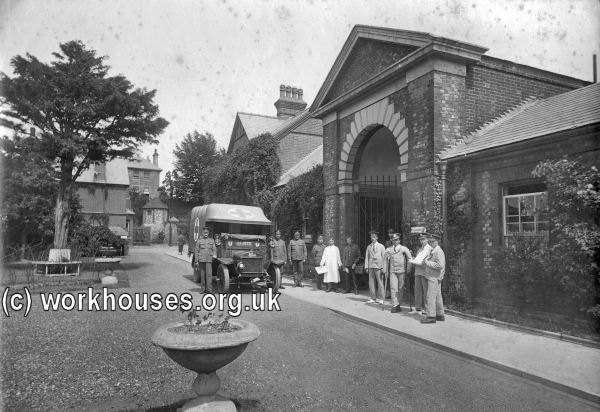 Guildford Workhouse in use as a War Hospital, c.1916.
© Peter Higginbotham 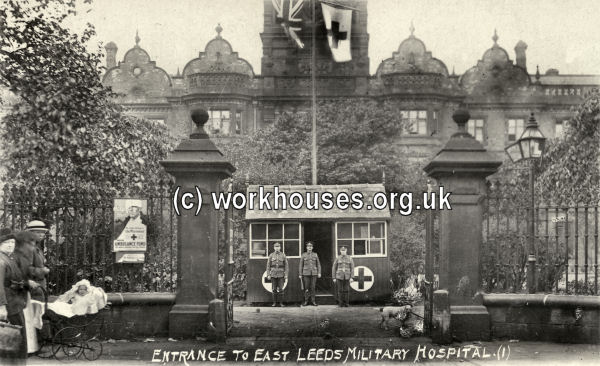 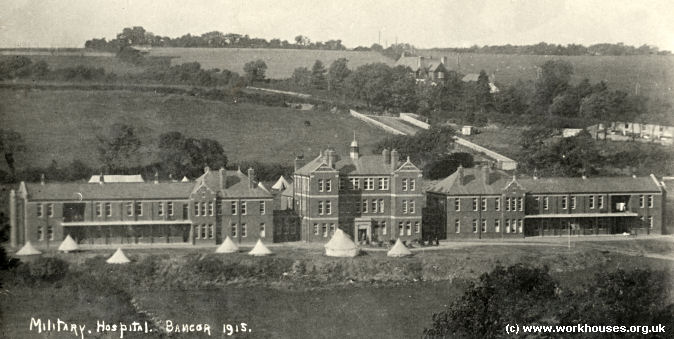 Bangor & Beaumaris Union infirmary in use as a war hospital, c.1915. Note tents in the grounds.
© Peter Higginbotham. 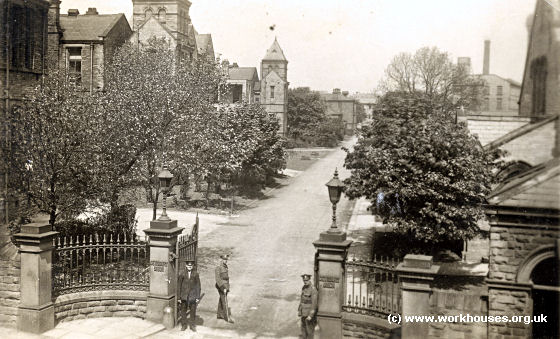 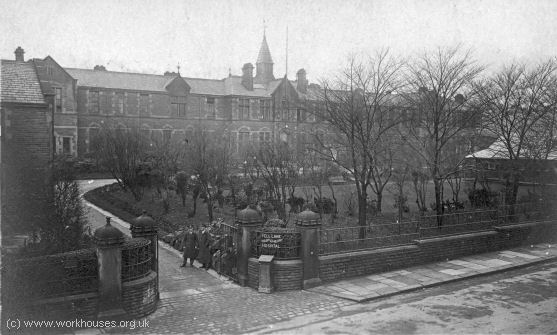 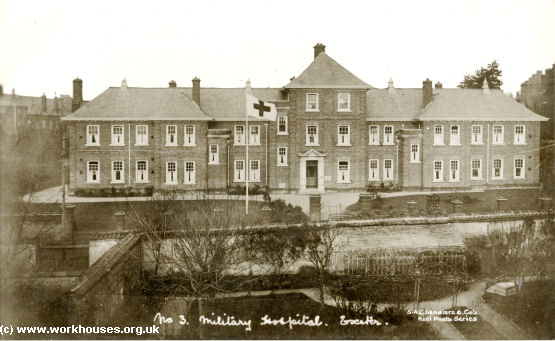 The treatment of battle casualties was not the only wartime medical facility to be provided in workhouses. Two or three unions in Sussex and Kent provided venereal clinics and maternity centres. Some, such as Tenterden received 'mental defectives' who would have otherwise gone into county asylums, many of which were also being used for war purposes. Wellingborough workhouse provided some accommodation for the Royal Army Medical Corps. 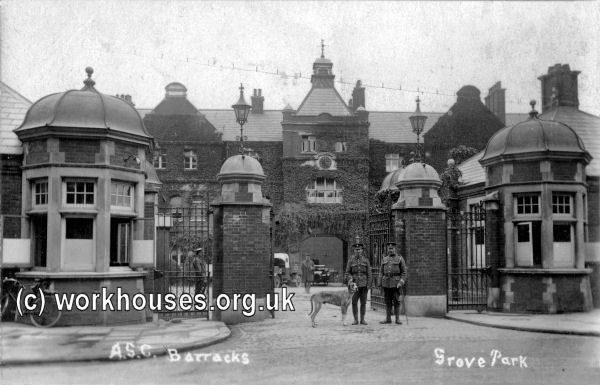 Workhouse premises served a variety of other uses during WW1. Several housed refugees including Holborn's Endell Street workhouse, the Strand Union's workhouse and Millfield House School at Edmonton, and the Loughborough Union workhouse. 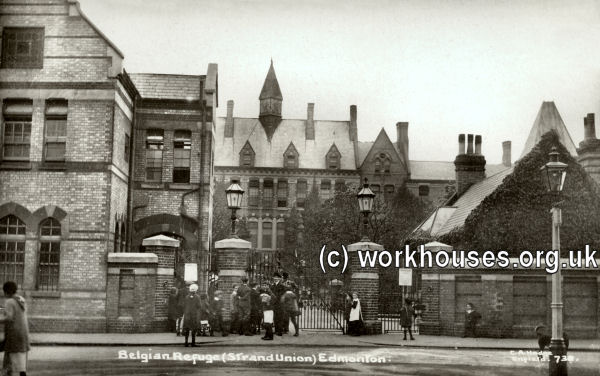 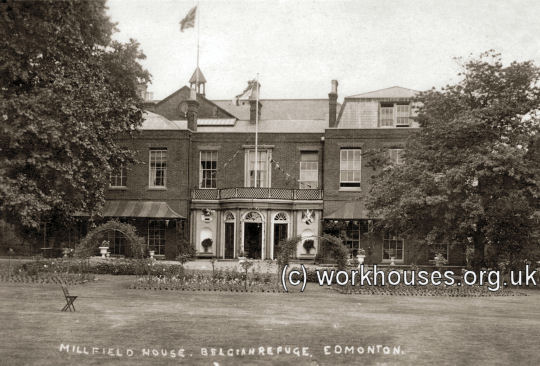 Westminster's Poland Street workhouse became a centre for Jewish refugees. Holbeach provided a guard room in connection with east coast defences. Blandford was used by the RAF. The Willesden workhouse and the Dartford Union's workhouse and children's homes were used to house munitions workers. The casual wards at Luton were used as military detention barracks, while those at Grantham were requisitioned for a Forestry Corps base. At Lincoln, the imbecile blocks and guardians' board room became a military administrative centre with up to 200 clerks being accommodated. The War Office occupied Patrington and Skirlaugh workhouses. Land girls were housed in part of Selby workhouse. The Ministry of Pensions took over a block in grounds of Newcastle-upon-Tyne workhouse and the Gateshead Union's hospital at Shotley Bridge was leased to the Ministry of Health to house military casualties, later being taken over by the Ministry of Pensions for ex-servicemen who still required medical treatment.

Scotland also made a significant contribution to the war effort. Glasgow's Stobhill and Western District hospitals were entirely turned over to military use together with the following poorhouses: Aberdeen (Oldmill), Edinburgh (Craigleith), Hawick Combination, Leith (Seafield Infirmary), Peebles Combination, Perth, and Renfrewshire Combination. 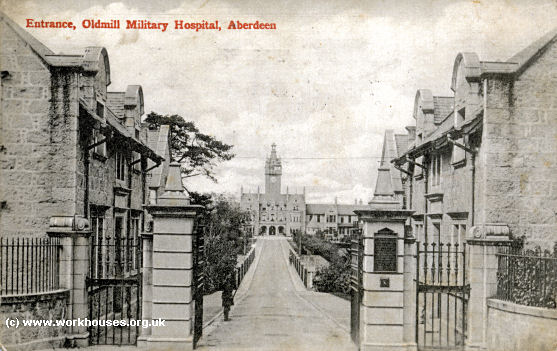 Aberdeen's Oldmill Poorhouse in use as a Military Hospital, c.1915.
© Peter Higginbotham.

Partial use was also made of the poorhouses at Dundee East, Dunfermline, Govan, Greenock (Smithston), Leith and Paisley. The Dundee West poorhouse was used for billeting troops, as were parts of the Falkirk and Black Isle poorhouses. Lochgilphead poorhouse was used as a temporary annexe to the Argyll District Asylum.

Use was also made of aome Irish workhouses in WW1. At the start of the war, Belgian refugees were briefly accommodated at a number of workhouses in the Dublin area and the Dunshaughlin workhouse was given over for use as a Belgian refugee centre or 'colony'. The whole of the workhouses at Baltinglass and Claremorris were occupied by the military, togthether the non-infirmary sections of those at Athlone, Ennistymon, Kilmalock and Tipperary, and the fever hospital at Shillelagh. In 1915, the workhouses at Antrim, Mallow, Mitchelstown and Oldcastle were handed over to the military authorities for unspecified purposes. The Oldcastlev workhouse is said to have been used to hold suspected German spies or sympathizers. Some use was made of the Belfast workhouse for treating military personnel.

At the end of the war, the military were sometimes slow in returning premises to the poor law authorities. At Bangor and Neath, for example, parts of the workhouses were retained as hospitals for disabled officers and men. When they were eventually handed back, there was often haggling about the state of repair and decoration in which the buildings were left. In some cases though, wartime occupation actually resulted in positive benefits such as the installation of X-ray and other equipment in some workhouse infirmaries. Workhouse staff employed for military work had sometimes received higher salaries and war bonus payments, together with shorter hours of duty.

During WW1, the Metropolitan Asylums Board also turned a number of its establishments over to wartime use. For example, the Brook Hospitalat Shooter's Hill became a military hospital and the Orchard Hospital at Dartford became a convalescent hospital for overseas troops, mainly Australians. 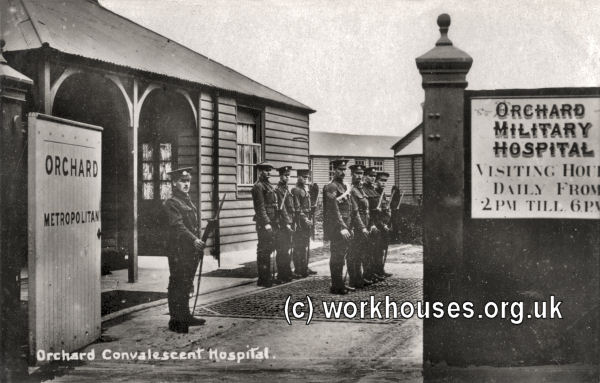 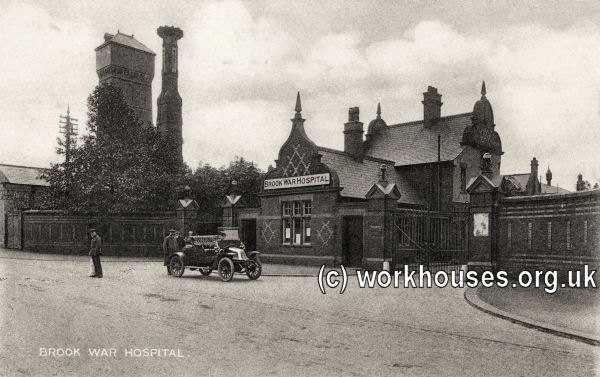