A parliamentary report of 1776-7 listed workhouses in operation at Hampstead Norris (for up to 10 inmates) and Wantage (75 inmates).

Wantage Poor Law Union was formed on 4th April 1835. Its operation was overseen by an elected Board of Guardians, 36 in number, representing its 33 constituent parishes as listed below (figures in brackets indicate numbers of Guardians if more than one):

The new workhouse was built in 1836 on a site on the Hungerford road, 1.5 miles to the south of Wantage. Its design, by Sampson Kempthorne, was for 230 inmates and cost £3,290. Its "square" layout can be seen on the OS map below.

Kempthorne also designed several other the new workhouses in the area, for example hexagonal designs at Abingdon and Bradfield, and another square design at Newbury.

On the evening of Wednesday 9 August 1843, a remarkably severe hailstorm passed over Wiltshire and Berkshire. At the Wantage workhouse, around 7,000 panes of glass were broken.

In 1846, the construction of a workhouse chapel was proposed. Dedicated to St Michael, the building was constructed to the north of the main workhouse in 1849-50 to a design by Butterfield at a cost of just under £1,000. The original architect for the scheme was Gilbert Scott but his proposals seem to have been more expensive than the Guardians wanted. The chapel was around 80 feet in length, and able to accommodate the whole of the workhouse's inmates — it required the workhouse's stable block to be relocated in order to build it. The chapel was demolished in the 1940s after becoming unsafe.

In 1869, it was decided to erect a new infirmary at the rear of the workhouse. The proposed scheme was outlined in The Builder:

INFIRMARY FOR WANTAGE, BERKS.
THE guardians of the poor of the Wantage Union, having determined to follow the example of the Boards throughout the country who have provided improved accommodation for the sick poor, have matured a scheme for pulling down certain old buildings at the back of the workhouse, and erecting an entirely new infirmary on the site. The new building will include ordinary and special sick-wards and day-rooms for both sexes, and lying-in ward. Lavatories, bathrooms, and other conveniences will be provided for all classes, and the building will contain most of the latest improvements of its kind.
More accommodation for the pauper poor has long been needed in this union, which consists of thirty-four parishes, and embraces a large district. The outlay will be about 2,000l. Plans have been prepared by Mr. J. P. Spencer, architect, of Wantage; and, the Poor-law Board having already approved of them, tenders will be advertised for forthwith.

After 1930, the workhouse was redesignated as a Public Assistance Institution, later becoming known as the Downs Hospital. Below are some views of the building from 1946.

A flavour of daily life is given by striking interior views from the same date: 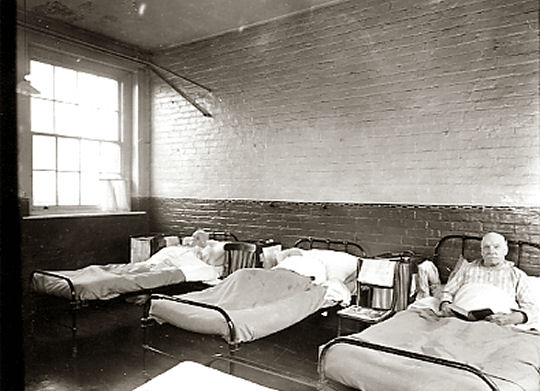 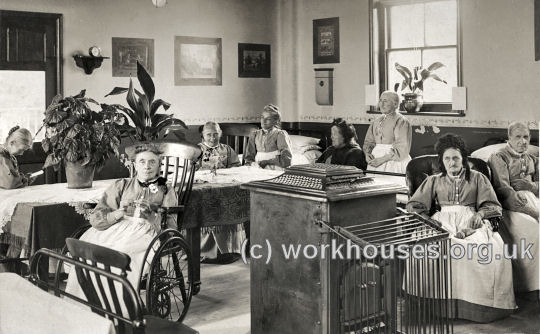 Since the closure of the Downs Hospital, the site has reverted to agricultural use. The old buildings have largely been demolished although parts of the ground floor have survived as single-storey stable buildings. The picture below shows a then-and-now comparison of the north-west range.

The original gate-posts at the main entrance to the site also still survive:

A final reminder of the workhouse days survives on an adjacent property named Spike Lodge Farm - the "Spike" was one of the old slang names for the workhouse.

The Wantage Union operated a home for pauper children on Manor Road, Wantage. In 1911, the Master and Matron were Alfred and Emiley Beckley. In their care were 16 boys and girls aged from 6 to 13 years.