In 1892, a new type of hostel for down-and-out or low-paid working men appeared in London — the first of the Rowton Houses created by philanthropist Lord Rowton. His aim was to provide a cheap accommodation that was better and cleaner than anything else available at the time. An overview of Rowton's scheme is given on a separate page.

The first Rowton House, at Vauxhall, which opened in December 1892, was personally financed by Lord Rowton. Following its success, a limited company was formed to expand the scheme. The King's Cross Rowton House, at the corner of King's Cross Road and Calthorpe Street, was the next to be built — it opened on 1st February 1896 and provided 678 beds. The location of the site is shown on the 1916 map below.

Rowton Houses were all constructed along the same basic lines. The ground floor and basement contained the entrance hallway, dining room, smoking lounge, reading room, washrooms, barber's shop, shoemaker's and tailor's rooms, clothes and boot cleaning rooms, parcels room etc. The upper floors contained large numbers of private cubicles each of which contained a bed, chair, shelf, and a chamber pot. Residence in the establishment cost 6d per day although no access to the cubicles was permitted during the daytime. Lodgers could either buy food in the dining-hall or cook their own food.

Here is a description of the King's Cross Rowton House from 1897:

A resident of the King's Cross House in 1899 also described its facilities:

The sleeping accommodation at Rowton House consists of cubicles. Each cubicle contains a bed and a chair, and above each bed there is a window, which the occupant may keep open or shut, as he please. There is a small shelf, and three iron pegs upon which he may hang his clothes. The sheets and blankets of the bed are ample, and the bed as comfortable as you get in a first-class hotel. To the door in the cubicle there is no lock, but only an iron bolt. To these six hundred and seventy-one sleeping-rooms there are only two locks and keys—the locks and keys of two great iron gates on the landing of the first floor.
These gates are closed at nine-thirty in the morning, and kept, locked all day until seven-fifteen, when one of them is opened to admit the first batch of sleepers, mostly men who have to rise at three, four, or five in the morning—workers in the Smithfield Meat Market, sellers of newspapers, and workers among the vegetables in Covent Garden.
This gate is opened again every quarter of an hour, when a fresh batch of sleepers will have gathered at the gateway, where they have to show their cubicle ticket, which is marked by the attendant, or stamped 'cancelled' if their time has expired. 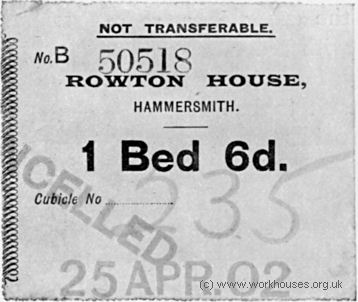 There are no appliances for washing on the cubicle floors. Washing is done on the ground floor. There are eighty wash-hand basins, with hot and cold water, towels hung upon rollers, and you supply your own soap.
There is a long; narrow room containing twelve large foot-baths in which the men may wash their feet.
And last—if it ever should be that the people for whom Lord Rowton has built these homes should wish to raise a tribute to his memory, let them carve at the base of its granite column that he gave them a bath, a clean towel, and soap for a penny.
And now we will pass to the breakfast and dining rooms. There are two rooms. The larger room contains thirty-eight tables made of oak, the smaller room nine tables—forty-seven tables in all. Four people can dine with comfort at each table, giving accommodation for one hundred and eighty-eight people at a time.
In the larger room there is a bar for the sale of provisions. At this bar there are three things they sell for a farthing—milk, matches, and vinegar. I bought a farthing's-worth of milk to use at breakfast this morning. For a halfpenny you can get a cup of tea, coffee, or cocoa, bread, watercress, onions in spring, marmalade, pickles, and butter. The articles to be purchased for a penny are too numerous to mention, but to-day you may get a small plate of cold meat, potatoes, and a salad of either cucumber or lettuce with tomatoes, the cost of which will be threepence. The working man dearly loves a salad. The walls of this room are hung with familiar engravings—Landseer's 'Horse-Shoeing', 'Elaine' ('the lily maid of Astolat'). In the smaller room the walls are brightened with chromolithographs—prominent among them Millais' 'Bubbles'.
There are two sitting-rooms, and in one of them a library, to which have recently been added two hundred and sixty new books, well printed and excellently selected. So far as my observation goes, Dumas seems to be most popular. I asked a workman the reason of this, and he answered: Because there's plenty of "go" about him.' Captain Marryat comes next—Midshipman Easy and delightful Peter Simple. Who would not be a boy again to read Peter Simple? But in this library there is one omission. Among these six hundred fellow-lodgers of mine, there are at times sorrowful people for whom there should have been provided a copy of Robinson Crusoe. You may play at draughts or chess, but cards are not permitted.

On 8th December 1906, a new wing was opened increasing the house's capacity to 964 beds.

The King's Cross Rowton House continued in operation until 1960, by which time prices had risen to 3s.6d per night for a simple cubicle, to 4s.6d - 7s. per night for more comfortable bedrooms. Over its life it had provided over 20 million bookings. After a £300,000 refit, it re-opened on October 9th 1961 as the Mount Pleasant Hotel with 340 single and 82 double rooms, each equipped with a radio and telephone. A single room with bed and breakfast now cost 21s, or 35s. for full board. In 1967, the owners successfully sued the author, publisher and printers of Len Deighton's London Dossier which claimed that the hotel was "too expensive for place that used to be a hostel for down-and-outs". The book also described the remaining Rowton Houses as "grim places, echoing with the cries and coughs of defeated men."

A publicity shot of the former King's Cross Rowton House after its conversion to a hotel, c.1961.
© Peter Higginbotham.

The other Rowton Houses in London were:

A number of Rowton-style hostels were also opened outside London, such as the Birmingham Rowton House in 1903.