The City of Westminster included the parishes and extra-parochial areas of:

Prior to 1834, all of these made use of local workhouses whose location often shifted over the years.

The Westminster Poor Law Union was formed on 16th March, 1868, from the parishes of St James, Westminster, and St Anne's, Soho. Its administration was overseen by a Board of Guardians, 18 in number, comprising 12 guardians from St James and 6 from St Anne's. The population falling within the new union at the 1861 census had been 52,752. The new Westminster Union took over the St James' workhouse at Poland Street.

In 1877, the aged women's ward was the subject of an illustration by Hubert von Herkomer entitled Old Age — A Study at the Westminster Union which appeared in the weekly magazine The Graphic. 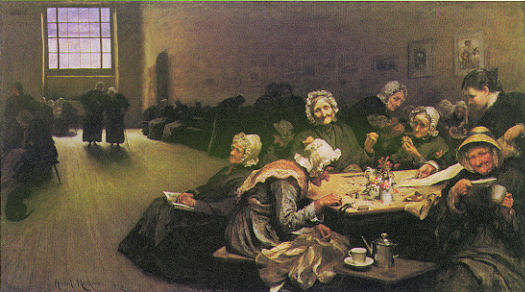 The City of Westminster Poor Union, formed in 1913, inherited workhouse sites from St George's Union at Fulham Road and Wallis's Yard, from the Strand Union at Edmonton. The union also purchased a tuberculosis hospital at Colindale from the Central London Sick Asylum District. In 1920, the Colindale site was re-sold to the Metropolitan Asylums Board.