The History of Poor Law Unions

Early workhouses were mostly set up within individual parishes. Parliamentary reports in 1776-7 list almost 2,000 parish workhouses in England and Wales — with approximately one parish in seven running one. However, the setting up and operation of a poor-house or workhouse often proved the resources of many individual parishes, so various schemes were devised for groups or unions of adjacent parishes to do this jointly.

An early model for the union was the London Corporation of the Poor, which was established in London in 1647 and continued until 1660. The Corporation set up workhouses in two confiscated royal properties, Heydon House in the Minories, and the Wardrobe building in Vintry. The Settlement Act of 1662 provided for the creation of Corporations in London, Westminster, and those parts of Middlesex and Surrey falling within the Bills of Mortality. Short-lived workhouses were subsequently set up by Middlesex in 1664 and Westminster in 1666 — the Middlesex workhouse stood at the corner of Corporation Lane and Bridewell Walk in Clerkenwell.

In 1696, a local Act in Bristol incorporated the eighteen parishes of the city and included the provision for the setting up of a workhouse run by paid officers. Two buildings, one previously used as the city's mint, were converted for the purpose, with much of the effort involving the housing and training of pauper children. 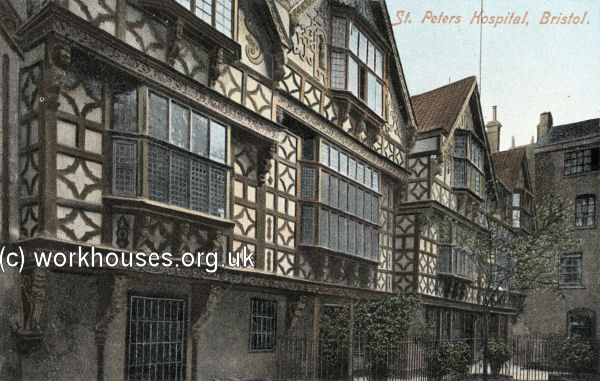 Within a few years, Bristol's example had been followed by a number of other cities, including a re-establishment in 1698 of the City of London Corporation which had a workhouse off Bishopsgate Street. An Account of Several Workhouses..., reported that it recived its first inmates in November 1700. The building appears to date from rather earlier — according to Robert Wilkinson's London Illustrata, it was finished in 1680. 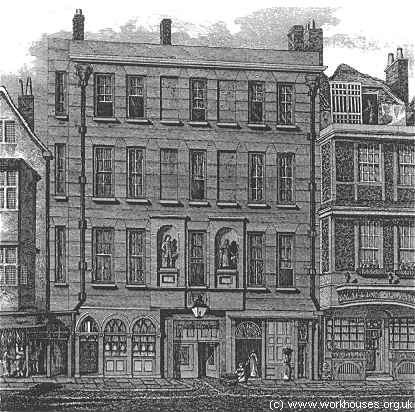 By the early 1800s, however, there was dissatisfaction amongst some incorporations and their failure to produce the anticipated reductions in the poor rate. This was often due to the large debt incurred by the building of the incorporation workhouses which, in Norfolk especially, were often almost palatial in size. The high standards of living and medical relief provided, and the lack of any real contribution to the running costs from the sale of goods and materials manufactured by the inmates were also significant factors. The Mitford & Launditch incorporation in Norfolk was almost dissolved on two occasions. The Loes & Wilford incorporartion in Suffolk was disbanded in 1826 and the workhouse and its contents sold off.

The origin of the term Union is most often associated with Thomas Gilbert's Act of 1782 which authorised adjacent parishes to combine (with the consent of two-thirds of the rate-payers) into Unions and to provide workhouses for the old, the sick, and the infirm. In addition, single parishes could also adopt the provions of the Act. Unions were controlled by a board of Guardians, one from each member parish, appointed by local magistrates. The Guardians' work was supervised by a Visitor, also appointed by magistrates.

Over the next fifty years, around a hundred Gilbert's Unions were formed. Agreements to form Unions or to change their membership were supposed to have been registered with the Clerks of the Peace, although this appears not always to have happened. The list of Gilbert Unions and Parishes below was compiled from various parliamentary papers but is not necessarily complete.

Although Gilbert Union workhouses were not supposed to be used for accommodating the able-bodied, this frequently appears to have happened. One of these, ironically, was the Thurgarton Hundred workhouse in Nottinghamshire whose strict regime for dealing with able-bodied inmates was influential in the formulation of the 1834 Poor Law Amendment Act. The new Act set out to create a uniform system of Poor Law Unions across the whole of England and Wales.

England and Wales from 1834

Under the Poor Law Amendment Act of 1834, the Poor Law Commission was given the power to unite parishes in England and Wales into Poor Law Unions, each Union being administered by a local Board of Guardians according to the directions issued by the Commission. According to the Act, relief was only to be given to able-bodied paupers through the workhouse and central to the formation of a Union was the provision of a workhouse building.

The first new Union to be formed, on the first of January 1835, was Abingdon in Berkshire. By the time of the Poor Law Commission's fifth annual report in 1839, a total of 583 unions (covering some 95 percent of parishes) were operating in England and Wales.

A late amendment to the 1834 Poor Law Amendment Act allowed Gilbert and Local Act Unions and Parishes to remain in existence if they so wished. The Poor Law Commissioners persuaded many of these to convert themselves into Poor Law Unions under the 1834 Act — in some cases, the lack of strict adherence to the terms of Gilbert's Act gave the Commissioners a legal lever to induce the conversion. However, by 1838, seventeen Gilbert Unions and Single Parishes (notably in Norfolk and Yorkshire) were still in existence. Taken together with the thirty-six Local Act Unions and Parishes, this meant that 663 parishes (almost 5% of the total in England) were not covered by the 1834 Act. The Commissioners (and the Poor Law Board that replaced them in 1847) made continued efforts to persuade them to fall in with the Act. In some cases, such as at Great Ouseburn, legal technicalities were used to forcibly dissolve old unions. Eventually, in 1869, legislation was passed to abolish all the remaining Gilbert Unions. Their member parishes were then distributed amongst other Poor Law Unions. Some Local Act Incorporations also eventually converted to Poor Law Unions, although a few, such as Exeter never did.

Even where Poor Law Unions were established, local opposition and resistance to the 1834 Act in areas such as Cornwall, central Wales and parts of northern England, sometimes meant that its operation was restricted. One of the most striking examples of this was at Todmorden where a union workhouse was not built until 1877, and only then under a Poor Law Board threat to dissolve the union and distribute it between the adjacent Rochdale and Halifax unions.

Although there was some periodic reorganisation of union boundaries, with a existing unions being dissolved or merged, most notably in London, the majority of the unions set up under the 1834 Act continued in operation for almost a century. The end came at midnight on Monday 31st March 1930, when a new Local Government Bill abolished all the Poor Law Unions and their Boards of Guardians, their role passing to county councils and county boroughs. Responsibility for the destitute then passed to new local Public Assistance Committees.

Poor Unions in Ireland from 1838

On 31st July 1838, an Act 'for the more effectual Relief of the Destitute Poor in Ireland' was passed, closely modeled on the one for England and Wales, and with the same Poor Law Commission governing its operation. Unions were to be formed based on electoral divisions which in turn were composed of townlands. By the end of 1841, an initial set of one hundred and thirty Irish Unions had been formed.

The operation of the Irish Unions was broadly along the lines of their English counterparts, although one third of each local Board was to comprise unelected ex officio members, most commonly local Justices of the Peace.

A decade later, between 1848 and 1850 in the wake of the Great Famine, a further thirty-three Unions were created, predominantly in the west of Ireland. This was achieved by subdividing some of the existing Unions, together with some additional boundary adjustments where necessary. For example, in County Clare, the northern part of the Ennistymon Union was split off to create the Ballyvaughan and Corofin Unions.

A separate web page is devoted to a detailed history of the workhouse in Ireland.

Poor Law in Scotland from 1845

The Poor Law in Scotland was rather different to that in the rest of the British Isles. Under the 1845 Act for The Amendment and better Administration of the Laws Relating to the relief of the Poor in Scotland, there was some encouragement for the uniting of parishes and setting up of combination poor-houses for the old and infirm, but the predominant system of outdoor relief at the parish level continued. Around seventy poor-houses were eventually constructed, most of which were administered by combinations — these are listed on a separate page.