Eden, in his 1797 survey of the poor in England (and parts of Wales), reported of Wrexham that:

The Poor are partly maintained in a Workhouse and partly at home. There are 46 persons in the house, chiefly old persons or young children, or the blind, lame or insane The master agreed to supply such Poor as the parish should send with meat, drink and fuel for 2s. a week each, and their earnings, but none of the present inmates can work. The parish provides the house, clothes, beds and bedding, and other furniture. Owing to the dearness of provisions, they have resolved to give the master 30 guineas. 260 regular pensioners receive weekly pay and others have occasional relief. Bill of fare, which is occasionally varied according to circumstances: Breakfast—every day, broth or milk. Dinner—Sunday, Tuesday, Thursday, meat and vegetables; other days, bread and butter or cheese. Supper—every day, bread and milk.

Wrexham Poor Law Union was formed on 30th March 1837. Its operation was overseen by an elected Board of Guardians, 61 in number, representing its 56 constituent parishes as listed below (figures in brackets indicate numbers of Guardians if more than one):

Wrexham Union workhouse was erected in about 1838 at a site to the west of Wrexham. The Poor Law Commissioners authorised an expenditure of £6,525 on construction of the building which was intended to accommodate 400 inmates. The workhouse site location and layout are shown on the 1909 map below.

The workhouse design followed the popular cruciform or "square" layout with separate accommodation wings for the different classes of inmate (male/female, infirm/able-bodied etc.) radiating from a central hub.

In 1842, it was reported that 42 out of 49 single mothers in the Wrexham workhouse were there because of the prevailing practice of allowing young men to pay night-time visits to female servants in agricultural areas of the union. The news clearly alarmed the board of guardians at nearby Congleton who instigated a campaign to ban such visits within its area, even producing a printed form of agreement to support the scheme. 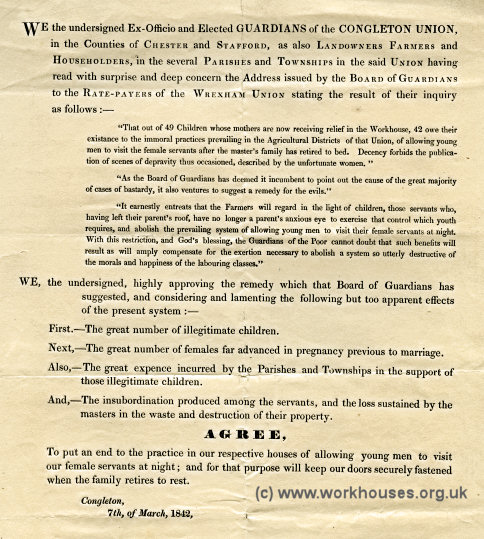 The form issued in 1842 to ban night-time visits to female servants.
© Peter Higginbotham

From January 1857 until July 1863, the Master of the Wrexham workhouse was William Bragger. Bragger's colourful life and his time at the workhouse have been researched by his great-great-great grandson Andrew Taylor, who has kindly provided the following account.

In 1894, the British Medical Journal set up a "commission" to investigate conditions in provincial workhouses and their infirmaries. Following a visit to Wrexham, the commission's report revealed that "the tone and management of this house impressed us very favourably; the officers seemed to regard their charges as human beings to be cared and planned for." Nevertheless, some improvements were recommended. These included an increased staff of nurses for the sick, the employment of a night nurse, and an end to the use of pauper help in the actual nursing. Better separation of the infants from the adults was also suggested, together with the provision of special accommodation for them when sick, and of a paid official to take care of them. Further details are available in the full report.

By 1900, a large infirmary had been erected at the west of the main workhouse building, with a fever hospital to its west. A separate chapel was added at the north-east of the main building.