The workhouse was a major element of Britain's poor relief system which, from the end of the sixteenth century, provided publicly-funded and administered assitance for local residents who could not support themselves. From 1601 until 1834, the poor relief was primarily administered by the parish — the area around a parish church ‐ and its governing committe, the Vestry. From 1662, townships — smaller centres of population with large rural parishes — could be given the same status as parishes for the pupose of administering poor relief.

Annually appointed parish officers, known as Overseers, collected money from householders based on the value of the property. The Overseers also dispensed the money as they saw fit, mostly to individuals in the form of out-relief — hand-outs of cash, bread, clothing, firewood etc. Able-bodied relief claimants were expected to work for their out-relief and some of the money could also be spent on housing the elderly and the chronic sick. The workhouse evolved during the seventeenth century as a way of reducing the cost of providing poor relief and also deterring fraudulent claims by the able-bodied. Out-relief remained the predominant method of providing poor relief, however.

The 1662 Settlement and Removal Act gave parishes the power to remove back to their home parish incomers who were judged liable to become chargeable of the poor rates. For more information on this topic, see the poor laws section of this website.

These records will generally now be deposited in county and metropolitan record offices. 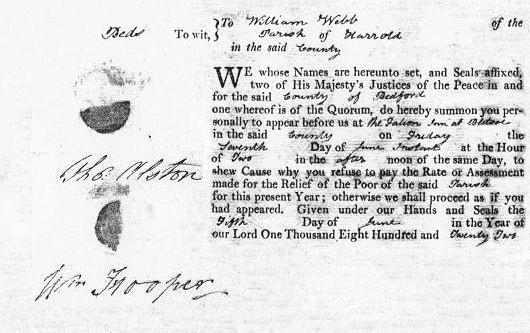 Example of a poor rate summons from 1822.

The settlement laws generated a great deal of administrative activity. Labourers wanting to move around had to obtain settlement certificates from their home parish. 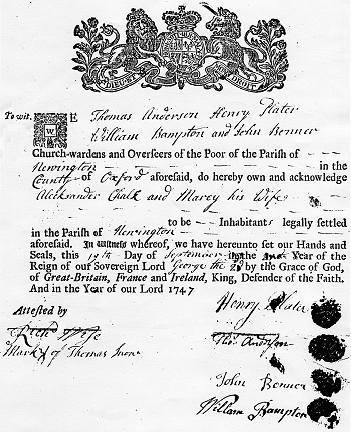 Example of a settlement certificate from 1747.

Someone who "became chargeable" to a parish in which they were not settled might have to undergo a settlement examination by a magistrate. Below is an example of an examination from 1829 in the Berkshire parish of Thatcham.

9 Mar 1829. Exam of Anne Hobson before __________. She is the wife of Benjamin Hobson residing at Houghton, Hants, and has 9 children, William aged 20, Elizabeth 18, James 15, John 13, Jemima 11, Mary Ann 8, Robert 6, Eliza 3 and George 11/2. William is living as a coachman with General Hopkins in Portman Square. He has been in service there for 12 months this last Christmas. Elizabeth has been in service in London for the last 7 years. James lives with his uncle, Robert Hobson, a grocer at Walthamstow as his servant. He has been there 2 years last Mmas. John went to work for Mr Green c.3 years ago this spring to drive the oxen, and worked for him c.2 or 3 months. Mr Reed engaged him at Mmas 1826 as carter boy at 3/6d a week and Mr Reed gave him 10/- towards buying a great coat for the boys at Mmas and has continued the same wages to this time. His mother asked Mr Reed to increase his wages at Mmas last, but he refused. The boy has continued in the same service and has not come away at all.

An unsuccessful examination would generally result in the person's forcible removal back to their home parish. 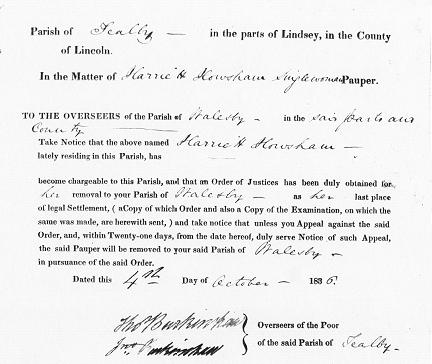 Example of a removal notice from 1836.